Are You Afraid To Die? 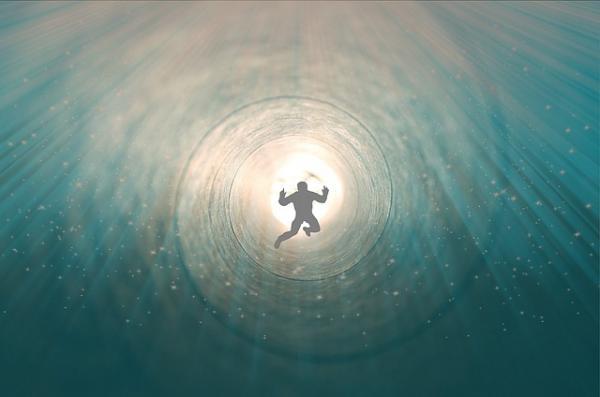 One of the biggest mistakes we can make is to assume that our sensual experience of the world is all that exists. Our five senses can often steer us wrong. In the natural world of our senses, a rock is a rock; a desk, a desk, skin, skin. Yet that rock you pick up and feel on your skin and place on the desk is 99.9% empty space—the space between its atoms; and so is your skin and the desk.

One of the greatest fears many humans possess is the fear of death. This fear arises from several areas. All fears originate in the primitive segments of our brain, what I have labeled the automatic brain or AB. It is primitive because it is purely reactive, activated by anything its neurons detect as potential danger, threat, or vulnerability. The reflex it causes is fight-or-flight. The only way our AB is different from animals, reptiles, or even lowly insects is that our frontal cortex is more evolved so that our dangers can occur in the form of thought, from stored memories and projections into the future.

One of the universal, innate “dangers” that the AB detects is the unknown. And naturally death is a very big unknown. Sure, many profess great belief and faith in an afterlife, but in our quietest moments, when all alone, our AB takes hold and, hence, doubt often sets in. Because, really, the idea of an afterlife flies in the face of logic and evidence derived from our senses.

So, if our life now is all that there is, well, that can be a bit scary when we think about it too much. The fear of death is the result of our AB causing us to fight or flee the thought or idea of the unknown of death. In essence, that is my definition of fear—the manifestation of the fight-or-flight response.

However, remember our biggest mistake from the paragraph above? We view death from the vantage point of life. If you ask many people what their greatest fear is about death, it is being buried alive in a box for eternity. Or perhaps traveling in nothingness trying to escape their dead body. It is an extreme sense of restlessness. In hospitals, some patients require the use of a breathing machine when in critical condition. If this machine can’t do its job, those people will surely not recover. Although not used that much anymore, when I was in training, we often used a paralyzing agent so that patients would not resist this machine, by kicking and jerking their bodies because of mental confusion. For if the tube came out they would risk further injury. When they recovered, I often discussed with them their experience. Some remembered, some didn’t. Those who did described a tortuous experience—a tube down their throat, people around, yet they were unable to move. They felt like jumping out of their skin, but couldn’t even lift a finger. This type of feeling is similar to what many have described to me as their fear of death—being dead, but still alive.

We must understand that viewing death through the eyes of the living is impossible. As our feeble brains cannot perceive nothingness, or infinity for that matter, how can we make a determination, one way or another? And one more thing—if our experience of the natural, “real”, world comes from our five senses, but those senses can detect only an infinitesimal fraction of the real structure of things, perhaps our perception of a supernatural divinity, God, is a real possibility (it is for me). A simple tweak in perception can open up a power, strength, and faith that we represent something much larger than ourselves and are destined to continue on, even after the death of our physical body; in a way incompatible with our current life view, yet in a way that we need not fear.

Location: Blog >> Are You Afraid To Die?